HOW WHEAT
DOMESTICATED US

Ecology
and the Wheels of Industry 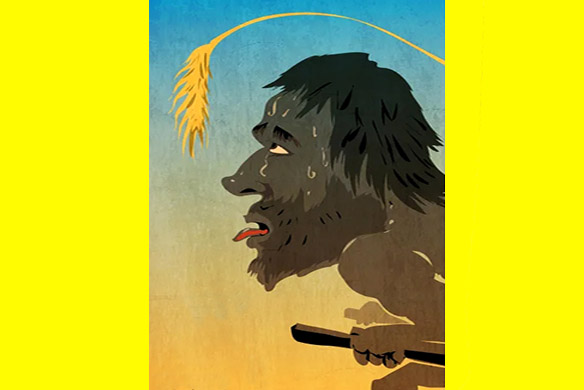 Think for a moment about the Agricultural Revolution from the viewpoint of wheat. Ten thousand years ago wheat was just a wild grass, one of many, confined to a small range in the Middle East. Suddenly, within just a few short millennia, it was growing all over the world. According to the basic evolutionary criteria of survival and reproduction, wheat has become one of the most successful plants in the history of the earth. 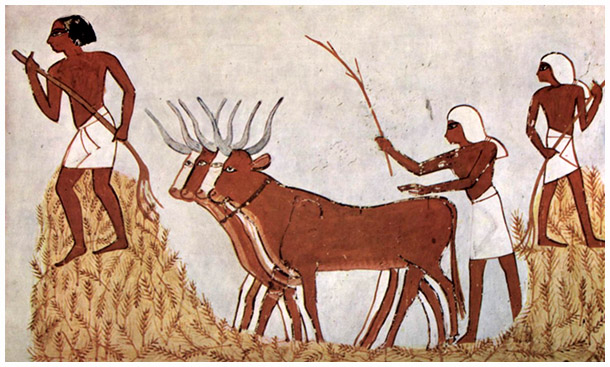 In areas such as the Great Plains of North America, where not a single wheat stalk grew 10,000 years ago, you can today walk for hundreds upon hundreds of kilometers without encountering any other plant. Worldwide, wheat covers about 2.25 million square kilometers of the globe’s surface, almost ten times the size of Britain. How did this grass turn from insignificant to ubiquitous?

Wheat did it by manipulating Homo sapiens to its advantage. This ape had been living a fairly comfortable life hunting and gathering until about 10,000 years ago, but then began to invest more and more effort in cultivating wheat. Within a couple of millennia, humans in many parts of the world were doing little from dawn to dusk other than taking care of wheat plants. It wasn’t easy. Wheat demanded a lot of them. Wheat didn’t like rocks and pebbles, so Sapiens broke their backs clearing fields. Wheat didn’t like sharing its space, water, and nutrients with other plants, so men and women labored long days weeding under the scorching sun. Wheat got sick, so Sapiens had to keep a watch out for worms and blight. Wheat was defenseless against other organisms that liked to eat it, from rabbits to locust swarms, so the farmers had to guard and protect it. Wheat was thirsty, so humans lugged water from springs and streams to water it. Its hunger even impelled Sapiens to collect animal feces to nourish the ground in which wheat grew.

The body of Homo sapiens had not evolved for such tasks. It was adapted to climbing apple trees and running after gazelles, not to clearing rocks and carrying water buckets. Human spines, knees, necks, and arches paid the price. Studies of ancient skeletons indicate that the transition to agriculture brought about a plethora of ailments, such as slipped disks, arthritis, and hernias. Moreover, the new agricultural tasks demanded so much time that people were forced to settle permanently next to their wheat fields. This completely changed their way of life. We did not domesticate wheat. It domesticated us. The word “domesticate” comes from the Latin domus, which means “house.” Who’s the one living in a house? Not the wheat. It’s the Sapiens.

How did wheat convince Homo sapiens to exchange a rather good life for a more miserable existence? What did it offer in return?

Excerpt from Chapter 5, Sapiens: A Brief History of Humankind

THE WHEELS OF INDUSTRY

During the last 200 years, industrial production methods became the mainstay of agriculture. Machines such as tractors began to undertake tasks that were previously performed by muscle power, or not performed at all. Fields and animals became vastly more productive thanks to artificial fertilizers, industrial insecticides, and an entire arsenal of hormones and medications.

Refrigerators, ships, and airplanes have made it possible to store produce for months, and transport it quickly and cheaply to the other side of the world. Europeans began to dine on fresh Argentine beef and Japanese sushi. 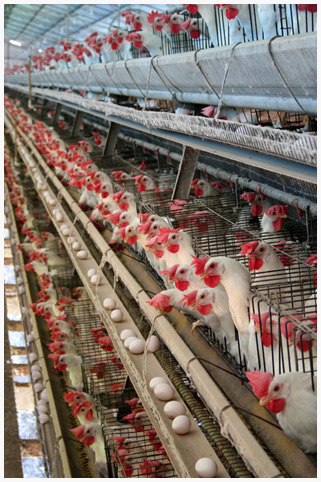 Even plants and animals were mechanized. Around the time that Homo sapiens was elevated to divine status by humanist religions, farm animals stopped being viewed as living creatures that could feel pain and distress, and instead came to be treated as machines. Today these animals are often mass-produced in factory-like facilities, their bodies shaped in accordance with industrial needs. They pass their entire lives as cogs in a giant production line, and the length and quality of their existence is determined by the profits and losses of business corporations. Even when the industry takes care to keep them alive, reasonably healthy, and well fed, it has no intrinsic interest in the animals’ social and psychological needs (except when these have a direct impact on production).

Egg-laying hens, for example, have a complex world of behavioral needs and drives. They feel strong urges to scout their environment, forage and peck around, determine social hierarchies, build nests, and groom themselves. But the egg industry often locks the hens inside tiny coops, and it is not uncommon for it to squeeze four hens to a cage, each given a floor space of about 25 by 22 centimetres. The hens receive sufficient food, but they are unable to claim a territory, build a nest, or engage in other natural activities. Indeed, the cage is so small that hens are often unable even to flap their wings or stand fully erect.

Pigs are among the most intelligent and inquisitive of mammals, second perhaps only to the great apes. Yet industrialized pig farms routinely confine nursing sows inside such small crates that they are literally unable to turn around (not to mention walk or forage). The sows are kept in these crates day and night for four weeks after giving birth. Their offspring are then taken away to be fattened up and the sows are impregnated with the next litter of piglets.

Many dairy cows live almost all their allotted years inside a small enclosure; standing, sitting and sleeping in their own urine and excrement. They receive their measure of food, hormones and medications from one set of machines, and get milked every few hours by another set of machines. The cow in the middle is treated as little more than a mouth that takes in raw materials and an udder that produces a commodity. Treating living creatures possessing complex emotional worlds as if they were machines is likely to cause them not only physical discomfort, but also much social stress and psychological frustration.

Evolutionary psychology maintains that the emotional and social needs of farm animals evolved in the wild, when they were
essential for survival and reproduction. For example, a wild cow had to know how to form close relations with other cows and bulls, or else she could not survive and reproduce. In order to learn the necessary skills, evolution implanted in calves—as in the young of all other social mammals— a strong desire to play (playing is the mammalian way of acquiring social skills). And it implanted in them an even stronger desire to bond with their mothers, whose milk and care were essential for survival. 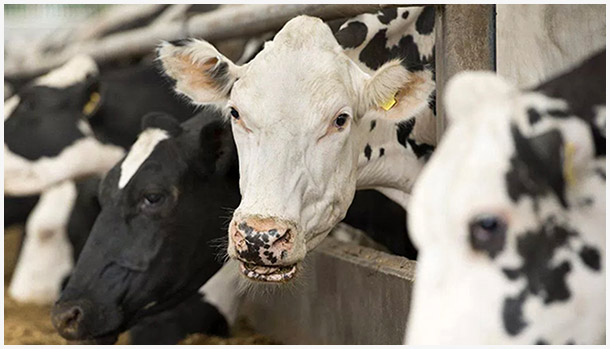 The truth of this theory has been known at least since the 1950s, when the American psychologist Harry Harlow studied the development of monkeys. Harlow separated infant monkeys from their mothers several hours after birth. The monkeys were isolated inside cages, and then raised by dummy mothers. In each cage, Harlow placed two dummy mothers. One was made of metal wires, and was fitted with a milk bottle from which the infant monkey could suck. The other was made of wood covered with cloth, which made it resemble a real monkey mother, but it provided the infant monkey with no material sustenance whatsoever. It was assumed that the infants would cling to the nourishing metal mother rather than to the barren cloth one.

To Harlow’s surprise, the infant monkeys showed a marked preference for the cloth mother, spending most of their time with her. When the two mothers were placed in close proximity, the infants held on to the cloth mother even while they reached over to suck milk from the metal mother. Harlow suspected that perhaps the infants did so because they were cold. So he fitted an electric bulb inside the wire mother, which now radiated heat. Most of the monkeys, except for the very young ones, continued to prefer the cloth mother.

Follow-up research showed that Harlow’s orphaned monkeys grew up to be emotionally disturbed even though they had received all the nourishment they required. They never fitted into monkey society, had difficulties communicating with other monkeys, and suffered from high levels of anxiety and aggression. The conclusion was inescapable: monkeys must have psychological needs and desires that go beyond their material requirements, and if these are not fulfilled, they will suffer greatly. Harlow’s infant monkeys preferred to spend their time in the hands of the barren cloth mother because they were looking for an emotional bond and not only for milk. In the following decades, numerous studies showed that this conclusion applies not only to monkeys, but to other mammals, as well as birds. At present, millions of farm animals are subjected to the same conditions as Harlow’s monkeys, as farmers routinely separate calves, kids and other youngsters from their mothers, to be raised in isolation.

Excerpt from Chapter 17, Sapiens: A Brief History of Humankind 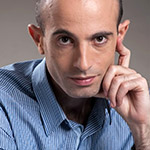 Born in Haifa, Israel, in 1976, Harari received his PhD from the University of Oxford in 2002, and is currently a lecturer at the Department of History, the Hebrew University of Jerusalem.

His current research focuses on macro-historical questions such as: What is the relationship between history and biology? What is the essential difference between Homo sapiens and other animals? Is there justice in history? Does history have a direction? Did people become happier as history unfolded? What ethical questions do science and technology raise in the 21st century?

Prof. Harari is a two-time winner of the Polonsky Prize for Creativity and Originality, which he was awarded in 2009 and 2012. In 2011 he won the Society for Military History’s Moncado Award for outstanding articles on military history. In 2017 Homo Deus won Handelsblatt’s German Economic Book Award for the most thoughtful and influential economic book of the year. In 2018 Prof. Harari gave a keynote speech on the future of humanity on the Congress Hall stage of the World Economic Forum annual meeting in Davos.

Published in 2014, Harari’s book Sapiens: A Brief History of Humankind has become an international hit. By 2018, 10 million copies had been sold and the book was translated into nearly 50 languages. It was listed on the Sunday Times bestseller list for over six months in paperback, and was a New York Times top 10 bestseller. Sapiens was recommended by Barack Obama, Bill Gates and Mark Zuckerberg.

In 2016 Prof. Harari returned with Homo Deus: A Brief History of Tomorrow, a critically acclaimed book that examines the big future projects facing humanity in the 21st century. Within two years, five million copies of the book had been sold
worldwide, and it was translated into nearly 50 languages.

After exploring deep into the past and then the future, Yuval Noah Harari published 21 Lessons for the 21st Century in 2018. Here he stopped to take the pulse of our current global climate, focusing on the biggest questions of the present moment: What is really happening right now? What are
today’s greatest challenges and choices? What should we pay attention to?

Prof. Harari regularly lectures around the world on the topics explored in his books and articles, and has written for newspapers such as the Guardian, Financial Times, The Times, Nature magazine and the Wall Street Journal.

He also offers his knowledge and time to various organizations and audiences on a voluntary basis. 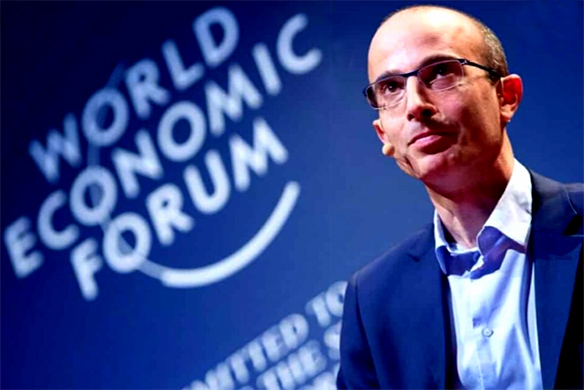 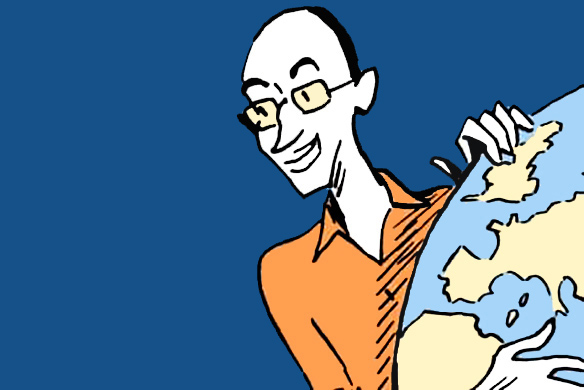 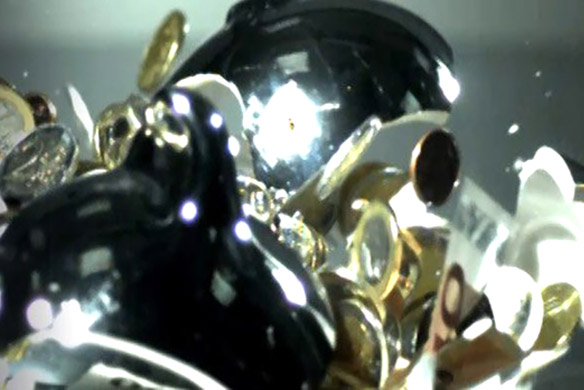 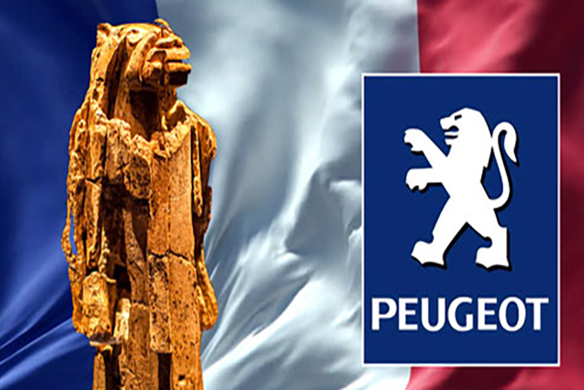