AMERICA
IS EXCEPTIONAL...
AND ORDINARY 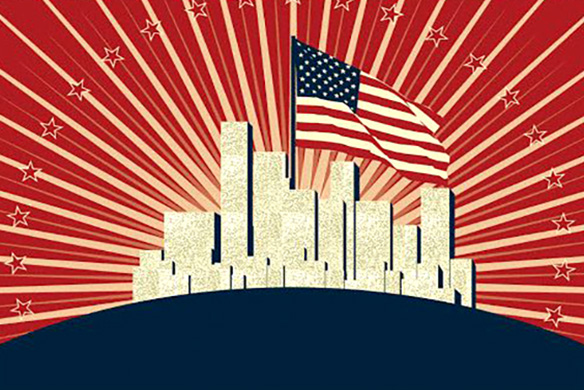 American exceptionalism is one of our countryʼs most cherished notions. There is considerable truth in it: we are different in a number of respects from the worldʼs other rich longstanding-democratic nations, a group that includes Australia, Austria, Belgium, Canada, Denmark, Finland, France, Germany, Ireland, Italy, Japan, (South) Korea, the Netherlands, New Zealand, Norway, Portugal, Spain, Sweden, Switzerland, and the United Kingdom. At the same time, there are a host of ways in which weʼre quite ordinary.

To some, “exceptional” doesnʼt just mean different; it means best. To others it means worst. As weʼll see, America is both.

Here is a brief and partial introduction to the United States in comparative perspective. Though it barely scratches the surface, it will give you a sense of some of the ways in which the US is both different and similar, both wonderful and woeful.

WEʼRE THE BIGGEST
We have by far the largest population, as figure 1 shows. Along with Canada and Australia, we also have the largest land mass (not shown here).

Our economy, too, is far and away the biggest, according to the standard measure — gross domestic product (GDP). Figure 2 shows this.

Sometimes big is good. Other times itʼs not. No one will rejoice at the fact that, as shown in figure 3, the United States has the most obesity of any affluent nation.

Figure 3. Obesity
Adult obesity rate. Obesity is defined as body mass index greater than 30. Solid lines: the obesity data are from actual measurements of peopleʼs height and weight. Dashed lines: the obesity data are from surveys in which people report their height and weight to the interviewer. “Asl” is Australia; “Aus” is Austria. Data source: OECD.

America also is the biggest contributor to climate change. Given the size of our economy, itʼs no surprise that our total output of carbon dioxide emissions is much greater than that of any other rich nation. But as figure 4 shows, our emissions are highest even when calculated on a per capita (per person) basis.

WEʼRE NEARLY THE RICHEST
The standard measure of a nationʼs affluence is GDP per capita. As figure 5 indicates, the US ranks second, behind only oil-rich Norway.

OUR POOR ARENʼT ESPECIALLY WELL-OFF
Americaʼs affluence doesnʼt trickle down to everyone in a straightforward fashion. As figure 6 shows, the income of US households on the lower part of the income ladder is below that of their counterparts in many comparator nations.

Income gives us only a partial picture of peopleʼs standard of living. To get a more complete sense, we can ask people about their actual living conditions: Are they regularly unable to pay bills? Do they have holes in their walls or cracks in their windows that theyʼre unable to fix? Is their neighborhood unsafe? And so on. Figure 7 shows that, according to the best available data, a larger share of Americans suffer material hardship than is the case in most other affluent countries.

OUR INCOMES ARE THE MOST UNEQUAL
So weʼre a fabulously affluent country in which the poor arenʼt particularly well-off. That suggests a high degree of income inequality. America is indeed quite unequal, as figure 8, which shows the share of household income that goes to the top 1%, makes clear.

Figure 8. Top 1%ʼs share of income
This is a measure of income inequality between the top 1% and the bottom 99%. Pretax income. Excludes capital gains. “Asl” is Australia; “Aus” is Austria. Data source: World Top Incomes Database.

WE USED TO BE THE MOST-EDUCATED, BUT NO LONGER
A generation ago, the United States had the highest rate of college completion among the worldʼs rich nations. But since then weʼve stalled, and a number of other countries have caught up and passed us, as figure 9 shows.

WE SPEND THE MOST ON HEALTH CARE,
BUT WEʼRE AMONG THE LEAST HEALTHY
America spends a lot of money on healthcare — far more, as a share of our GDP, than any other rich nation. Figure 10 shows this gap.

Despite this massive spending, we donʼt live very long relative to our counterparts abroad. In fact, life expectancy in the US is lowest among the affluent countries, as figure 11 indicates. Infant mortality data (not shown here) tell a similar story.

WE PRIZE EMPLOYMENT,
BUT ONLY A MODEST SHARE OF US ARE EMPLOYED
Employment is front and center in the American ethos. Yet fewer Americans are in paid work than in many other affluent nations, as figure 12 shows.

OUR LABOR UNIONS ARE AMONG THE WEAKEST
Labor unions play a significant role in determining wage levels and wage growth in many of the worldʼs rich countries. That used to be true here too, but not any more. As figure 13 shows, barely one in ten American employees now have their wages set via collective bargaining.

WE HAVE A MODERATELY FREE ECONOMY
Liberty is one of our core values. And yet, according to one measure, displayed in figure 14, our economy is fairly ordinary in the degree to which economic actors are free to choose.

WEʼRE THE BIRTHPLACE OF MODERN DEMOCRACY,
BUT NOT MANY OF US VOTE
Our political system, like that of other affluent democracies, is a representative democracy. Though there is a role for direct democracy, in the form of state and local referendums, most important political decisions are made by elected representatives rather than by the citizenry. As figure 15 indicates, compared to our counterparts in other affluent nations, relatively few Americans participate in electing those representatives.

Figure 15. Voter turnout
Voters as a share of the eligible population. Legislative elections. In the US, turnout is shown only for years in which there is also a presidential election. “Asl” is Australia; “Aus” is Austria. Data source: Institute for Democracy and Electoral Assistance (IDEA), series VAP turnout.

OUR POLITICAL INSTITUTIONS ARE UNUSUAL
Beyond the fundamental similarity of representative democracy, the structure of Americaʼs political institutions is relatively unusual.

OUR GOVERNMENT TAXES AND SPENDS LESS THAN MOST
There are various ways to measure the size of government, but a common one is according to the share of the economy (the GDP) that passes through the government. As figure 16 shows, by the standards of the worldʼs rich nations that share is relatively low in the United States. 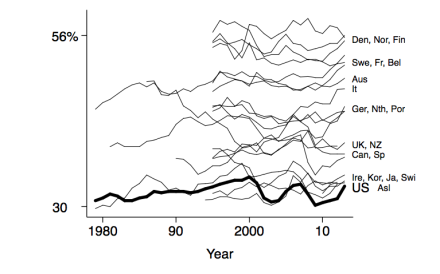 WE SPEND THE MOST ON THE MILITARY
Though our governmentʼs overall size is comparatively small, there is one government program on which we spend a lot. As figure 17 shows, our military spending is the highest among the affluent countries. 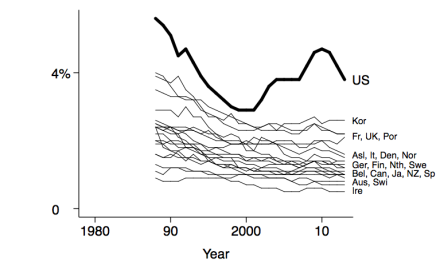 WEʼRE THE MOST RELIGIOUS
A larger share of Americans say religion is “very important” in their lives than is the case in any other affluent democracy, as figure 18 shows. The share in the US has been declining since 2000, and if that continues it wonʼt be too long before we join the club of secularized countries. But for the moment weʼre still exceptional in this regard.

WEʼRE THE MOST PUNITIVE
When it comes to crime and punishment, our approach over the past generation has had more of an Old-Testament flavor than a New-Testament one. As figure 19 shows, we incarcerate a larger share of our population, by far, than any other affluent nation. Part of this owes to the fact that our murder rate is the highest, but murders account for only a small portion of crimes, and our rates of assault, rape, robbery, and other types of crime arenʼt particularly high relative to other countries.

WEʼRE MODERATELY WELCOMING
America has long been a land of immigrants, a country that, more than any other, welcomed the worldʼs tired, its poor, its huddled masses yearning to breathe free, in the words of Emma Lazarusʼ homage to the Statue of Liberty. Immigration restrictions imposed in the 1920s dampened the embrace, while a reform in 1965 and a partial amnesty in 1986 reopened the door to a significant degree. Where do we stand today? Figure 20 shows that the US is now quite ordinary in its foreign-born population share.

WEʼRE MODERATELY TRUSTING
As an open society that prizes individual liberty, America depends, to a certain degree, on our ability to trust one another. Do we? The World Values Survey regularly asks a representative sample of adults whether “most people can be trusted” or “you need to be very careful in dealing with people.” Americans are middle-of-the-pack in trustingness, as figure 21 shows. 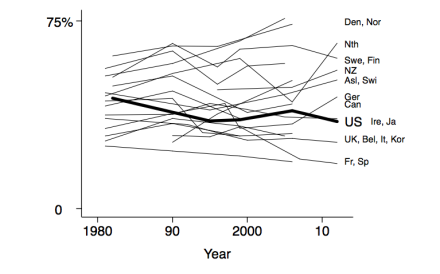 WEʼRE SOMEWHAT HAPPY
Our nationʼs founding document, the Declaration of Independence, highlights the pursuit of happiness as an “inalienable right” of Americans. How happy are we? A good comparative measure comes from a question regularly asked by the World Values Survey: “All things considered, how satisfied are you with your life as a whole these days?” Respondents are asked to rate their life satisfaction on a scale of one to ten. Relative to our counterparts in other rich longstanding-democratic countries, we Americans are ordinary in our happiness, as figure 22 shows. 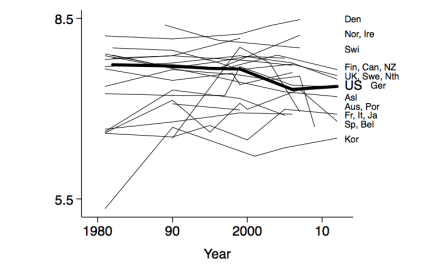 Figure 22. Life satisfaction
Scale from 1 (completely dissatisfied) to 10 (completely satisfied). Question: “All things considered, how satisfied are you with your life as a whole these days?” The vertical axis doesnʼt begin at zero. “Asl” is Australia; “Aus” is Austria. Data source: World Values Survey, via the World Database of Happiness, series 122F. 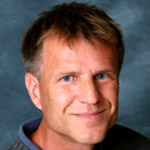 Lane Kenworthy is an American professor of sociology and political science. He has worked at the University of Arizona since 2004, being a full professor since 2007. He is known for his statistical and analytic work on the economic effects of income and wealth distribution.
He advocates incremental reforms to the U.S. welfare state in the direction of the Nordic social democratic model, thereby increasing economic security and equal opportunity.